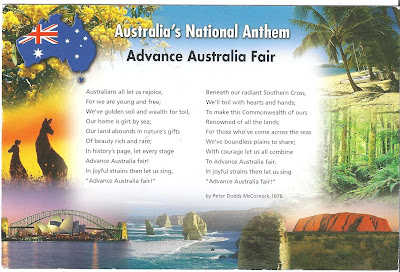 I know every word to the song Waltzing Matilda but I don't think I've ever heard (or at least paid attention to) the words of the Australian National Anthem:  Advance Australia Fair.

The song did not become the  official anthem until 1984 when it had to go up against the Royal anthem God Save the Queen, the "unofficial anthem" Waltzing Matilda and Song of Australia in a vote.

Another fun fact learned through participation in Postcrossing.  Check it out.
Posted by Mary at 6:00 AM