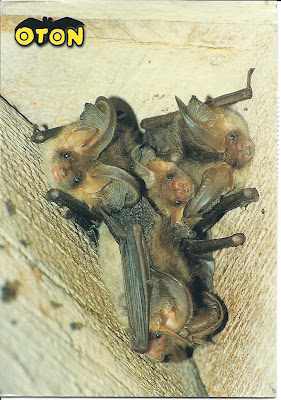 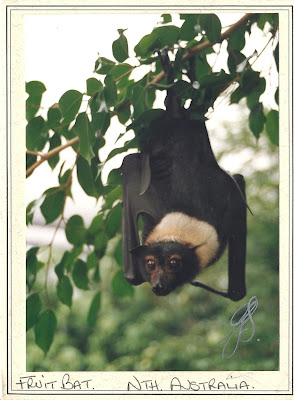 I was surprised to find I had two postcards of bats, one of Polish bats (or at least bats on a postcard sent from Poland) and one of fruit bats in northern Australia.

The Polish bats came from Gouraanga (her Postcrossing ID) who lives on the Polish coast of the Baltic Sea in a town called Koszalin.  She describes herself as a mad ecologist who studied bats and their habitats for a couple of years.  Very cool! And, very unusual to get such a card through Postcrossing.  Thanks, Gouraanga!

I'm not sure where the fruit bat postcard came from - it may have been from my mom's collection.  She recently moved out of her home of 48 years and found lots of postcards which she passed on to me.  In any case, the Australian fruit bat is also knows as a "flying fox".  The one in the postcard above appears to be a Spectacled Flying Fox.

Some interesting info about bats from the Wikipedia:


Bats are flying mammals in the order Chiroptera.  The forelimbs of bats are webbed and developed as wings, making them the only mammals naturally capable of true and sustained flight. By contrast, other mammals said to fly, such as flying squirrels, gliding possums and colugos, glide rather than fly, and can only glide for short distances. Bats do not flap their entire forelimbs, as birds do, but instead flap their spread out digits, which are very long and covered with a thin membrane.
There are about 1,100 bat species worldwide, which represent about twenty percent of all classified mammal species.
20% of all mammal species are bats?  That number surprises me - it seems so high.  Who knew?
Posted by Mary at 6:00 AM