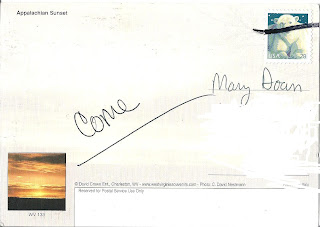 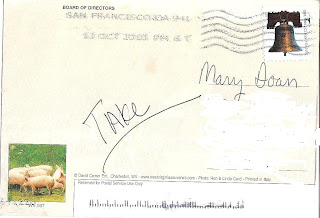 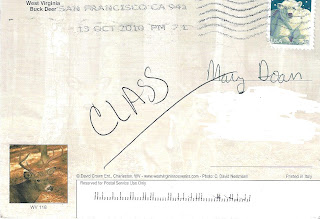 I've been taking a screenwriting class over the last year, starting last January.  I took it once Spring semester and had started again in the Fall.  When I started my new job, I had hoped to keep going even though I'm not sure I've got the time or the energy.

The above cards appeared in the mail last Friday.  I'm pretty sure they are from my screenwriting teacher, although they are not signed.  But I'm not taking any other classes so who else could they be from?  I don't think I've ever mentioned the class here before, and the Mystery Sender wouldn't know about the class.  Also, Mystery Sender sends from LA and these cards are postmarked in San Francisco.

I'm not sure I'll be able to finish this class this semester, but if anything would inspire me to do so, these cards are it.  They made me feel good, made me feel like, even if I'm not going to be a screenwriter someday, I should at least keep learning.  I appreciate the message, and feel a bit guilty about not following through.

Postscript:  I wrote this post in October, and then neglected to post it.  I did stop attending class.  However, it turns out these postcards were sent to  me by an exercise teacher (gyrotonics - similar to Pilate's, but you sit on little stools), not by the screenwriting teacher.  I felt conflicted by my previous assumption - bummed that these weren't from my screenwriting teacher but happy that my gyrotonics teacher had noticed I wasn't there.  I suppose this is a message from the universe.  I can picture a big voice and a stern finger:  "When you've got extra time, spend it exercising instead of taking writing classes." - as close to a new year's resolution as I'm going to get this year!
Posted by Mary at 6:00 AM