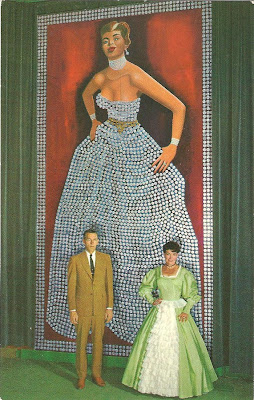 From the back of the postcard (from 1965):  "Designed by owners Carroll and Ruby Eaton as a tribute to Virginia City's once great Silver Mining Industry - an industry whose production stabilized the Federal treasury during the Civil War and later altered the world's monetary structure.  The Silver Queen's dress contains 3,261 Silver Dollars.  The belt alone contains 28 Twenty Dollar gold pieces.  The picture is fifteen feet high and eight feet wide...."

My grandfather always gave us grandchildren a silver dollar for our birthdays.  He also baked the birthday cake (chocolate angel food) and would put dimes in the batter.  It was terribly exciting to get a piece of cake with a silver dime in it.  I saved those silver dollars, and had a nice collection.  However, at some point they were stolen out of my room when I was away at college.