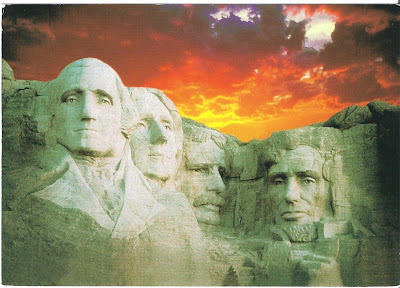 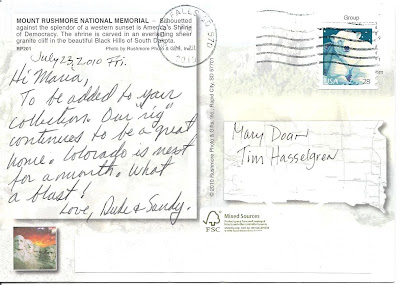 A particularly beautiful view of Mount Rushmore, at Sunset, sent from Duke and Sandy during their second cross country odyssey.  It's a bucket list place for me, and I'm under the impression that the scale is not really imaginable unless you see the monument in person.

From the Wiki:  South Dakota historian Doane Robinson [note the first name - no relation] is credited with conceiving the idea of carving the likenesses of famous people into the Black Hills region of South Dakota in order to promote tourism in the region.  Gutzon Borglum  chose the site and decided the sculpture should have a ... national focus,...choosing the four presidents whose likenesses would be carved into the mountain. After securing federal funding, construction on the memorial began in 1927, and the presidents' faces were completed between 1934 and 1939. ...Though the initial concept called for each president to be depicted from head to waist, lack of funding forced construction to end in October 1941.

The U.S. National Park Service took control of the memorial in 1933, while it was still under construction, and manages the memorial to the present day. It attracts approximately two million people annually.