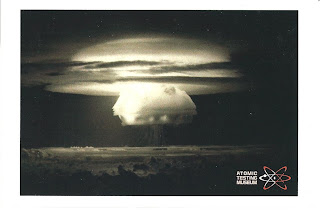 Now that the Liberace Museum has closed, what's a thinking person to do when visiting Las Vegas?

Well, how about the Atomic Testing Museum?  As described in Frommer's:

From 1951 until 1992, the Nevada Test Site was this country's primary location for testing nuclear weapons. Aboveground blasts in the early days were visible to the tourists and residents of Las Vegas. This well-executed museum, library, and gallery space (a Smithsonian affiliate) offers visitors a fascinating glance at the test site from ancient days through modern times, with memorabilia, displays, official documents, videos, interactive displays, motion-simulator theaters (such as sitting in a bunker, watching a blast), and emotional testimony from the people who worked there. It respectfully treads that tricky line between honoring the work done at the site and understanding its terrible implications. Not to be missed, even if it's only because of the Albert Einstein action figure in the gift shop. Visitors should plan on spending at least an hour.

I'm adding an Albert Einstein action figure to my Christmas list.
Posted by Mary at 8:23 AM