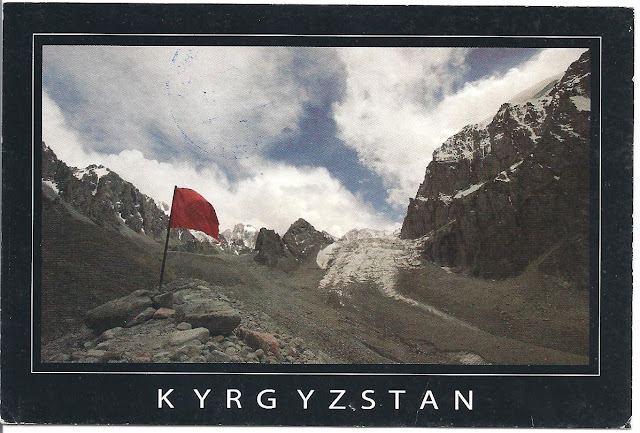 This postcard from Krygyzstan is a first for me - a postcard from one of the "-stan" countries - sent by my friend, Andrew.  He and his girlfriend have embarked on some incredibly exotic and adventurous trips, one of which had them traveling overland throughout Central Asia.  Andrew describes it on the back of the postcard as, "..this country is so beautiful.....Having a great time here trekking around beautiful mountain valleys and soaking up the local Muslim culture in towns."
Their trip didn't sound easy, in any way, and I admire their sense of adventure and fearlessness.  This view is in Ala Archa National Park, at the trail head for the Ak-Sai Trail.  This may be the trail they hiked up in tennis shoes, while the locals marveled at their inappropriate gear.
The Wikipedia entry on Kyrgyzstan offers this random piece of information that might come in handy the next time you have a friend turning forty, and are looking for a more exotic reference to "forty" than "40 days and 40 nights", "The 40 Year Old Virgin", "Forty Winks" or "Drinking 40s".  From Wikipedia:
"Kyrgyz" is believed to have been derived from the Turkic word for "forty", in reference to the forty clans of Manas, a legendary hero who united forty regional clans against the Uyghers. Literally it means "We are forty". At the time, in the early 9th century AD, the Uyghers dominated much of Central Asia (including Kyrgyzstan), Mongolia, and parts of Russia and China.

By extension, Kyrgyz is also thought to mean "unconquerable" or "undefeatable".
The 40-ray sun on the flag of Kyrgyzstan is a reference to those same forty tribes and the graphical element in the sun's center depicts the wooden crown of a yurt – a portable dwelling traditionally used by nomads in the steppes of Central Asia.