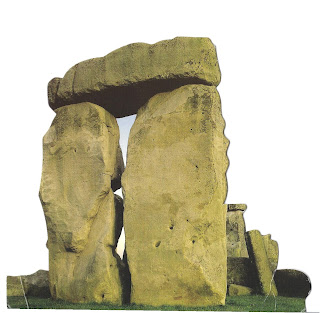 Gotta love the irregularly shaped postcards.  This one of Stonehenge comes from my son, during his stint at Oxford last summer.

Archaeologists have mostly determined that Stonehenge was used more as an ancient burial ground as opposed to serving as a astronomical calculator and/or observatory, although it may have had some significance to the winter solstice.

No matter the science, 20,000 people showed up for the summer solstice in 2005, and  it's much more romantic to think about this organized pile of rocks as a place of ancient worship and Druid ritual.   From the Wiki:

Throughout the twentieth century, Stonehenge began to be revived as a place of religious significance, this time by adherents of Neopagan and New Age beliefs, particularly the Neo-druids: the historian Ronald Hutton would later remark that "it was a great, and potentially uncomfortable, irony that modern Druids had arrived at Stonehenge just as archaeologists were evicting the ancient Druids from it." The first such Neo-druidic group to make use of the megalithic monument was the Ancient Order of Druids, who performed a mass initiation ceremony there in August 1905, in which they admitted 259 new members into their organisation. This assembly was largely ridiculed in the press, who mocked the fact that the Neo-druids were dressed up in costumes comprising of white robes and fake beards.

From 1972 until 1984, Stonehenge was the setting for a free music festival, until the "Battle of the Beanfield" in 1985.  This infamous battle was "waged" between new age travelers and the local police.  I particularly like the headline from the BBC on that day about the incident:  Hippies clash with police at Stonehenge.  As always, one man's clash is another man's battle.