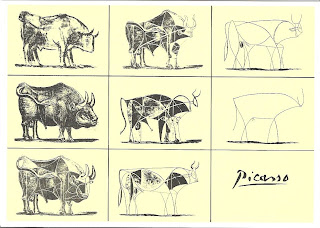 While this postcard is not from there, the Picasso Museum in Barcelona was a high point of my recent trip to Spain. The setting itself, located in a medieval palace in the gothic quarter in Barcelona, complete with marble stairs worn in the center of each riser from years of people walking up and down, was spectacular.

What I found most fascinating about this museum was two rooms full of paintings focused on the Velazquez masterpiece "Las Meninas".   From the Wiki, "...(in) 1957, Pablo Picasso painted a series of 58 interpretations of Las Meninas, and figures from it, which currently fill the Las Meninas .... Picasso did not vary the characters within the series, but largely retained the naturalness of the scene; according to the museum, his works constitute an 'exhaustive study of form, rhythm, colour and movement'."   In addition, there was a particularly compelling video juxtaposing the original Velazquez painting with Picasso's work.  As I've never had any training in art history or evaluation, seeing Picasso's interpretations gave me a glimmer of understanding about Picasso's art.   Sophisticated readers may scoff at my school girl's enthusiasm, but I  had just seen "Las Meninas" at the Prado, and was excited to feel my brain learning something new.

Turns out there are seven Picasso-specific museums in the world, two in France, two in Germany and three in Spain, including this one in Barcelona. I have only visited one other - the one in Paris.
Posted by Mary at 8:26 AM