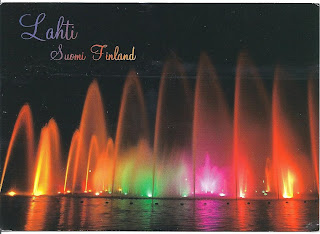 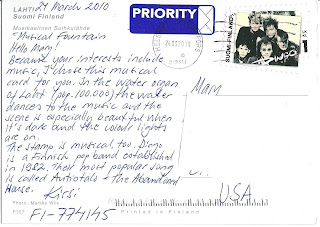 It's been mentioned before, but I can't say enough good things about Postcrossing.  Even the tag line is perfectly straightforward:  “send a postcard and receive a postcard back from a random person somewhere in the world!”

This postcard is a particularly good example.  In my profile, I mention that I enjoy music.  Kirsi, from Finland, chose not only a card that features the above pictured musical fountain in Lahti, Finland, the stamp chosen is musical as well, honoring the Finnish band, Dingo.

In the "Musikaalinen Suihkulande" ("musical fountain") the movement of the water is choreographed to the music, and everyday at 1 PM and 6 PM, there is a 15-minute concert.  The band, Dingo, was extremely popular in Finland, causing a phenomenom called Dingomania and inspiring a youth culture whose adherents are called "the Dingos"

These Dingos are not to be confused with the famous line "a dingo ate my baby".  I was aware of this line from both the movie starring Meryl Streep about the disappearance of said baby, and the conviction and subsequent acquital of the mother (played by Streep), as well as its use by Elaine in a particularly hysterical Seinfeld episode.  [You can watch the bit from Seinfeld here.  The expression on Elaine's face is priceless.]   I had forgotten one of my favorite Gary Larsen Far Side cartoons in which he shows a group of babies outside a nursery adjacent to "Ed's Dingo Farm" with the caption "Trouble Brewing". I did not know that the fictional band in the television series "Buffy the Vampire Slayer" was called Dingoes Ate My Baby, with Seth Green as the lead singer.  If you look at this wiki, there is a listing of many places illulstrating how much the line itself became a part of popular culture.
Posted by Mary at 9:25 AM