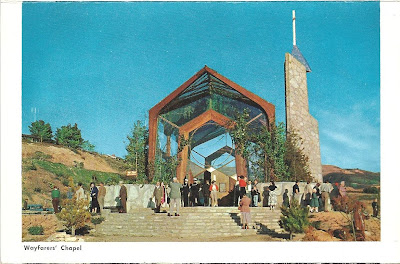 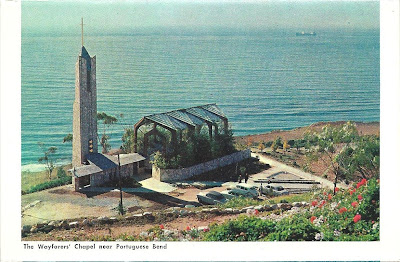 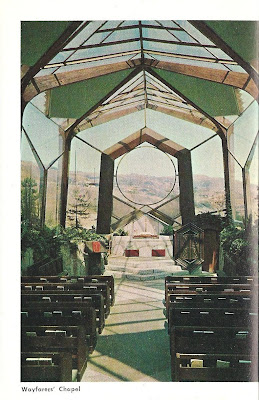 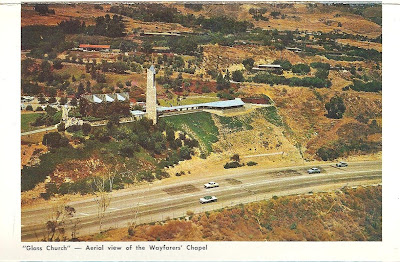 The Wayfarers Chapel was not part of Marineland, but there are four pictures of this non-denominational glass church in the Marineland multi-fold folder.

I've been to this church at least twice.  Once I was there for a wedding although whose I can't for the life of me remember; the other (and first)  was when I "ditched" school, my senior year in high school.  I had forgotten all about that day until I saw these pictures.  My friends Michelle and Richard and I left at the lunch hour, and didn't return for our afternoon classes.  I can't remember why, but we ended up in Palos Verdes, overlooking Portuguese Bend, which is the last remaining undeveloped land on the Palos Verdes Peninsula.  Wayfarers Chapel must be nearby as we stopped and walked around its grounds.  As I recall, the area around the chapel was a lot more developed than the picture in the lower right would indicate.

Surprising that in a 12-picture fold out postcard from Marineland (one side clearly says "Greetings from Marineland of the Pacific"), seven of the pictures are not of Marineland.  A closer look at the address side shows the "smaller print":  "World Famous Marineland of the Pacific, California and the Beautiful Palos Verdes Peninsula".  [See first Marinland post, here.]  Well, there you go.  I wonder if this was a bit of a marketing tool for all of Palos Verdes?
Posted by Mary at 5:00 PM