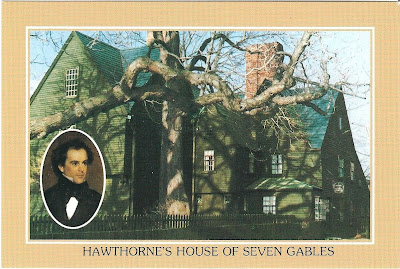 Nathanial Hawthorne, of The Scarlet Letter and The House of Green Gables fame, practiced transcendentalism but his writing is considered part of the "dark romanticism" subgenre of literature.   I was not an English major long enough to get to a sophisticated level of genre understanding in American literature, but the different approaches of dark romanticism  compared to transcendentalism is pretty interesting, and I imagine reflects entire generations of conflicting viewpoints within American society.  From the Wiki,
Dark Romantics present individuals as prone to sin and self-destruction, not as inherently possessing divinity and wisdom. G.R. Thompson describes this disagreement, stating while Transcendental thought conceived of a world in which divinity was imminent, "the Dark Romantics adapted images of anthropomorphized evil in the form of Satan, devils, ghosts . . . vampires, and ghouls". Secondly, while both groups believe nature is a deeply spiritual force, Dark Romanticism views it in a much more sinister light than does Transcendentalism, which sees nature as a divine and universal organic mediator. For these Dark Romantics, the natural world is dark, decaying, and mysterious; when it does reveal truth to man, its revelations are evil and hellish. Finally, whereas Transcendentalists advocate social reform when appropriate, works of Dark Romanticism frequently show individuals failing in their attempts to make changes for the better.
I wonder if every high school freshman still has to read The Scarlett Letter? Its pessimistic view of human foibles had to have had a lasting impact on us all.
Posted by Mary at 6:30 AM